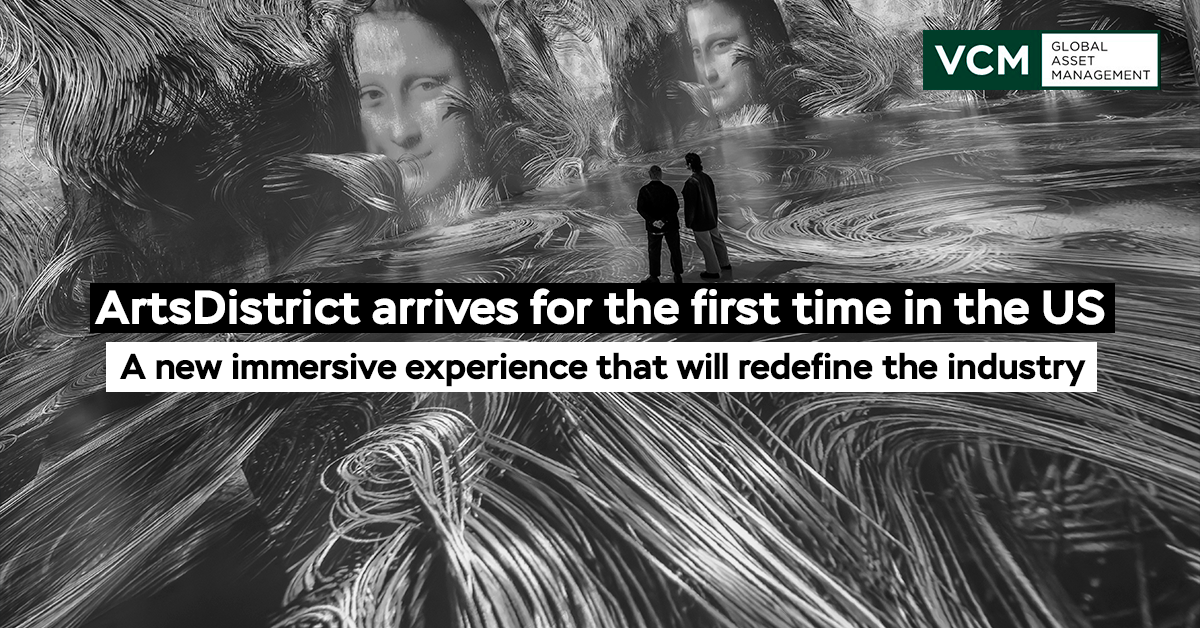 NEW YORK, July 27, 2022 – ArtsDistrict, specialized in immersive experiences, a groundbreaking, multi-billion-dollar industry that is taking Europe by storm and helping redefine entertainment and revitalize urban areas post-COVID in the US, will debut in New York City at the end of July.

ArtsDistrict, a studio that creates next-generation, collective experiences and stories with technologies, and venues that bring them to life, will launch its flagship location, ArtsDistrict Brooklyn (a/k/a AD/BK), on Thursday, July 28 at 25 Franklin St., in the Greenpoint section of Brooklyn. ArtsDistrict is redefining immersive entertainment through new technologies and programming that will rollout in the coming months. This will herald the start of a new category inside an industry that is worth more than USD750 billion a year in the US.

The new industry is already attracting interest from major institutional US investors such as VCM Global Asset Management (VCM), which has approximately USD1 billion in assets under administration and invested early in this project. Now ArtsDistrict’s goal is to disrupt and define the new entertainment category by leveraging its proprietary, cutting-edge technology for live and interactive experiences, including holography, digital media, and 3D displays. To expand its shows and reach more US consumers, ArtsDistrict is planning other permanent venues in major US cities including Los Angeles, San Francisco, New Orleans, and Clearwater, FL, within the next two years. The company is actively pursuing international locations and partnering with top developers to build out new venues in key markets.

Such major entertainment venues will represent an opportunity to ailing shopping malls that are trying to revive the number of consumers that visit their establishments in the wake of the pandemic. Indeed, such venues have an opportunity to reinvent themselves with live entertainment and food trucks, attracting US consumers, who are focused more on experiences than acquiring products. Consequently, VCM is working closely with ArtsDistrict to identify, negotiate and build out new permanent venues, helping anchor the local arts and entertainment communities.

“This form of Immersive Entertainment is new to the US, but we have already seen similar shows in Europe attract more than one million visitors per venue, and consequently believe there is massive potential to grow this emerging entertainment industry stateside by creating premiere experiences in arts-centered communities across the US,” says Tom Vukota, Founder and CEO of VCM. “Similar to what we have seen on streaming platforms, we are using a business model focused on de-risked show development by partnering with major creators and performers,” he adds.

“We are rethinking immersive entertainment, creating live shared experiences that immerse the audience in the middle of stunning, realistic, 360-degree audiovisual experiences and combining it with next-gen interactive technology and content from artists. Our goal is to engage the audience not as a spectator, but as a creator and participant,” says David Galpern, ArtsDistrict co-founder. He added, “We are excited to bring some of the most groundbreaking works in the world to US audiences and debut new shows that are unlike anything audiences have seen.”

VCM is ultimately bringing together its expertise in venture capital investments and combining it with ArtsDistrict’s co-founders’, David Galpern and Charles Roy, 20 plus years of live entertainment success producing and programming for global audiences and sold-out venues in North America.

ArtsDistrict Brooklyn will launch with three US premieres of boundary-breaking, immersive experiences. The marquee event is “Limitless AI” by internationally renowned artists Ferdi & Eylul Alici of Ouchhh Studio (Istanbul), creators of the award-winning 2018 global sensation, “Poetic AI,” which was seen by 1 million visitors in Paris. The 10,000 square-foot, 60-minute show features over 60 projectors and cutting-edge sound design, and a live musical performance that drives original AI creations at every show. Ouchhh’s monumental data sculptures and immersive, site-specific installations have been seen by millions of audiences across the globe in Europe, Asia, the Middle East, North America, and Australia. ArtsDistrict Brooklyn will also feature the UK-based company Darkfield’s shows, “Flight” and “Séance,” deeply intense, thrilling, immersive, audio experiences that blend theater, technology, and 360-degree sound, presented in complete darkness, inside customized 40-foot shipping containers, and have played to sold-out houses in the UK, Australia, Mexico, and South Korea.

ArtsDistrict is an entertainment and tech company, with a focus on creating collective immersive experiences that re-envision under-utilized real estate to anchor community renewal. ArtsDistrict co-founders David Galpern and Charles Roy have been creating immersive shows and venues and commercially viable entertainment for over 20 years. Based in Toronto, the innovative duo has conceived and produced tech-enabled Broadway-scale musicals, sold-out immersive entertainment experiences, live performance centers, and multiple immersive exhibition halls. They have partnered with some of the top experiential creators in the world, bringing together unparalleled creative talent and globally recognized IP. The work of the executive team has generated billions in box office revenue across live entertainment and film. ArtsDistrict has its own dedicated “AD Labs,” which develops groundbreaking products and entertainment such as its soon-to-be-unveiled spaces project, the “Wonder Room.” The company has also created AD Studios, which works closely with major creators to produce and license content for its immersive experiences. For more information visit: www.ArtsDistrict.Live